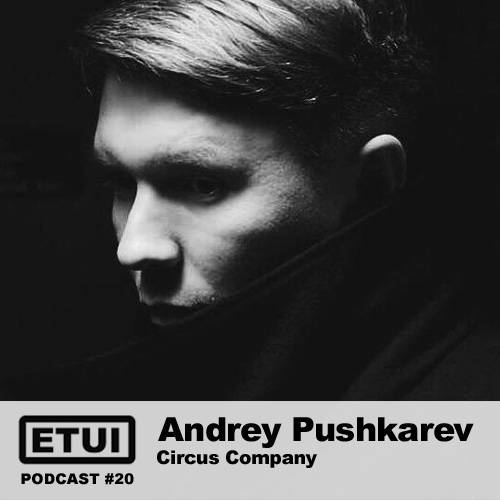 Andrey Pushkarev continues to move floors with a combination of profound musical knowledge, unique professionalism and a meticulously gathered vinyl collection. Currently living in Moscow, where he has gained popularity as radio DJ, he found his way into the international electronic music scene releasing on respected labels such as Circus Company and Endless Records.

We discovered Andrey years ago through Deep Mix Radio and found out he has been playing Etui records in many of his sets. We took the chance to sit down with him and chat about his music while listening to his DJ mix contribution to our podcast series.

It was in 1996 when a friend came back from London and brought Drum & Bass CDs and cassettes. Since then I started to get closer to the electronic music scene inspired by artists like Jeff Mills, Underworld, Chemical Brothers, Dave Angel, Dave Clarke and Ken Ishi.

In 2006 you started working at Deep Mix Moscow Radio, streaming your sets to listeners worldwide. What was the key to success of the online radio station?

This project was born to connect like-minded people with the same passion for music. We were recording sets, uploading them on the website and people were listening to and downloading them. Within 5 years, the radio had broadcasted noncommercial Techno music to 6000 monthly listeners from 53 countries, all for free and without advertising and I think that was the unique character of the radio.

Your first performance in France back in 2007 led you to a tour to most European countries as well as South America. What about the Russian techno scene compared to the scene in France or Chile?

I would say that the dance clubs that started flourishing in the Russian capitals in the 1990s are now as good as their Paris, London and Berlin counterparts. The club scene keeps going at the steady beat of underground house and techno with internationally respected clubs like Arma 17, Rodnya and Propaganda. There is no traditionally established music industry or strict rules but there is a collectively felt necessity to create something new. France has a longer history in the electronic music scene and the fact that there has been always a legal status for artists made its international recognition and expansion possible. Chile has an amazing and  brilliant creative scene but professionally I can imagine that for an artist it might be hard to be able to live for your art.

You are currently working with several FM and Internet radio stations. What is the key role of the Internet for distributing music nowadays?

The same as always in my opinion: promotion and entertainment. A way to get your music accessible and heard to a larger audience than playing in a club and eventually connect with the people who support your music.

How do you select the music for a radio show and is it different to touch listener’s hearts when playing in a club?

When I play in a club I let the people and the atmosphere inspiring my record selection. It is a mutual exchange of energy with the crowd and the surrounding environment. I try to be in tune with the people’s rhythm and select the records  accordingly. Radio shows and podcasts are something different. I do create a story behind a mix and for me the narrative of the execution is the core. For some mixes it took me even a year to complete the “story”  in the way I wanted to tell it.

In 2013 you first own EP “Gingo Bilobla” has been released on Circus Company. What was the final step that led you into music production?

I met Mathias Duchemin, the owner of Circus Company,  in 2007 when our mutual friend, Fabrice Bousteau, introduced us to each other. I respected the label and Mathias liked my music. A year later my first ever EP came out on Circus Company:

How did you find out about Etui Records and what is your favourite track on the label?

I go through the catalogues of record shops and online retailers nearly everyday. This is how I found Etui. My favourite track of the label is Dandytracks – Dubstories About Us 2

From what do your draw your inspirations?

It is going to be the 20th anniversary of my DJ career next year and something special will be dedicated to this for sure.

We are in the coldest season of the year and this mix is an ode to nature in its hibernation state. Deep and contemplative.