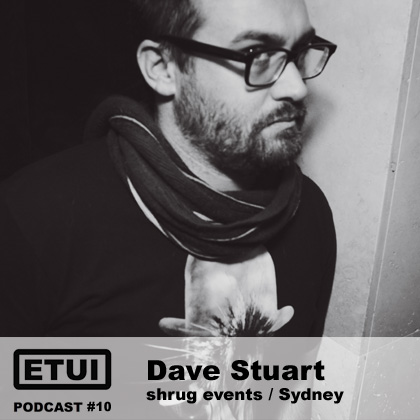 If you think of Sydney, the Sydney Opera or Bondi Beach come in mind. But the capital of New South Wales has also a growing scene of electronic dance music. A lot of regular club events and festivals in and around Sydney were held the last few years and brought many djs from overseas such as Luke Hess, Kollektiv Turmstraße, Peter Van Hoesen, Efdemin, Aril Brikka or even Insect O. to the city.

Sydney´s Dave Stuart not only played with a most of them, furthermore as part of shrug events and booker for the One22 club he invited them to play in down under for the first time. In his Etui Podcast he shows his love for deep house & techno and gives a view into australian`s techno and house music.

How you would describe Australian`s techno and house music scene in general?

Over the years the scene ebbs & flows, much like the tides of the oceans I guess. At present there are some very talented artist’s coming through the ranks. The more commercial music is always very popular in Australia due to the high % of young people who just listen to whatever is played on the radio. The summer music festivals tend to dominate the scene, there are about 6 to 8 festivals of over 50,000 people that happen in Sydney each year which pull all the big name acts. This unfortunately prices most of the underground acts that you’d commonly see play in Germany to be unaffordable to do club shows.

So all the work i´ve put in over the years to book international artist is very very tough, and i´ve never made much money from it…its all just for the love of music. And you have to do it as there are usually 5 parties on every Saturday night and at least 2 will have a bit international act that you have to compete against.

One of the good things though is we have a very strong local scene and many of our local dj’s can perform just as well as the big names.

Is there something special about the scene in Sydney?

If I was to pick one thing it would be how close everyone is, in our underground scene in Sydney we are like one big family. Nearly everyone gets along really well and we all try to help each other out, most of the promoters dont look at each other as competitors, but as friends. I think we’d all rather see each other busy than see anyone suffer, especially with the high costs of running parties there.

We’ve got a few really great little parties around Sydney that always have a fun & friendly vibe happening. Plus there’s something for everyone if you know where to go, lots of different music to choose from, and young to older crowds.

Probably the one thing that sets Sydney apart from anywhere else in the world is the boat parties that we have. Sydney has one of the most beautiful harbour in the world and all the way from Spring to Autumn there are loads of boat parties. Anything from small yachts for 50 of your closest friends, to a big 3 level boat that holds around 800 people…..

Also there are some really cool young acts coming through, the Hunter Gather label is a prime highlight of this, they are all in their early 20’s really lovely people and make some fantastic techno!

With pinksilver music you have a kind of network with producers and djs from other cities such as Echo Inspectors from Melbourne. How important is networking?

In this day & age networking is essential in some capacity, and not only in the hope to achieve something / get somewhere. I think it is just as important to share knowledge and information to as many people you may be interested about artists that I truly believe in.

The Pinksilver label represents this well, whilst I´m not officially a part of the label my wife, Trinity, looks after the A&R for Sydney. So I guess im part of the “family” so to speak. Whenever I come across artists that fit the label I always put them forward, the music the label releases (net, digital and some vinyl) is all deeper styles of techno & house, so very much what I love.

One of the artists i´ve met over the last couple of years is a relatively unkown guy called Squarepeg, once I heard his stuff I recommended it for Pinksilver straight away. He’s very talented and underrated imo…

I look at creating networks as a bit of responsibility of mine, i’m about to enter my late 30’s soon and I want to encourage as many young artists to play good music. So whenever I meet someone who plays / makes great music and has a nice attitude I do my best to help them out with bookings for gigs and suggesting them to other promoters when suitable. When I step back from playing as much i’d like to see the scene in a healthy state.

In 2012 the big record stores closed in Sydney and Melbourne. How you do you find new music?

Instead of going to record shops to buy viny now though it`s mostly all online (though i’ve enjoyed buying records in Berlin!) I think being online is great as you can go record shopping at a time which suits you best, usually late at night…. The big issue with searching online is that there is a LOT of bad music to search through. Though I have a few ways that help me find good music faster, I NEVER look at charts or top 100 lists….. I do use beatport a little bit, but I have my favroite artist / labels saved and generally only need to listen to those to find nice tracks. I’ve been spending more and more time finding music on Bandcamp lately, I like how more of the money goes to the artist and I find a lot more “interesting” music on there. I also have a few really good promo pools that I get sent some nice music from too..

Are there some other social meeting points where djs, producers and promoters meet each other now?

Yeah its such a shame that happened, whilst I’ve been in Berlin i’ve re-discovered the joys of record shopping again!!! The main thing that killed off the record stores in Sydney (the internet…) is how we all keep in touch these days, it has its good and bad points I guess, but for me its mostly good. It is almost impossible to make a full time living from music in Australia so we all have normal 9-5 jobs, and being able to keep in touch via social media is very helpful. Whilst im in Europe im still able to run a weekly party in Sydney!!!

As in real face to face time, everyone in the scene in Sydney gets out every weekend to support each others parties, once you’ve been out a couple of times you’ll have hundreds of new friends

You are in Berlin now for 3 months and enjoying your honey moon with your wife Renae, who is producing under the name Trinity. What are you doing all day long?

It’s a bit of a cliché, but it’s very inspiring being over here, we come over as often as possible but never for this long. It’s been great to just relax and become at one with the city. I’ve eaten too much turkish food and am missing Sydney’s cheap but amazing asian food a lot.

My wife’s been busy every day working in the studio room where we’re staying (she’s the talented producer out of us two). She’s spending nearly 8-10 hours a day working on music!!!! And she’s just recorded a new live set this week….

Because i´ve had a lot of my own time my average day consists of sleeping in late, hanging out with a lot of friends during the day, picnics, record shopping, drinking too much beer & wine and just generally chilling out and then seeing the wife at night :P

Is the scene and the vibe in Berlin similar or different to Sydney and how were your first dj gigs in Germany?

This is an interesting question, there are a lot of similarities and differences between the two cities. Sydney is very strictly controlled by the government so clubs can not stay open late and we have a lot of laws regarding sound / alcohol, no smoking inside etc etc….also Sydney only has ONE outdoor venue! Compare to lots and lots here….plus Sydney clubs are a lot smaller. I prefer the smaller clubs in Berlin like Sisy & Griessmuehle rather than the major big clubs.

What I do find the same is that there is a lot of the same “commercial” music being played in Berlin as well as Sydney, that deep / tech house sound which is popular everywhere it seems. So musically so far I havent been really surprised by much. The crowds are pretty similar too, everyone seems nice and friendly and there for the music.

Saying that we went to a party run by Paraell angency, this was definitely our highlight so far, it was one of those parties where everything is just perfect, music, venue and crowd. Was absolutely amazing and made us feel like we were part of their family!

Gigs…..well I can assure you that i’m very much looking forward to playing in Dresden on the last weekend of August.

Hmmm tricky question, mixes are also for me rather personal things and I like to try and put a lot of myself into the tracks that I select, for this one I tried to fit a nice deep dubby journey into one hour. When I do podcasts I try to put myself in the mind of when people might be listening to it and create a nice mood for them…..this is one of those mixes that I think is nice for when you’ve got home from a long night out and want to relax and close your eyes…..

This mix I think is a nice quick example of my love for things dubby & deep…also keep a ear out for some of the artists that i’ve mentioned above that have tracks in this mix ;)

Thanks for the nice mix and the interesting interview. We wish you and your wife some wonderful days in Europe and looking forward to hear you playing  at Sektor Evolution in Dresden on the last weekend of August.