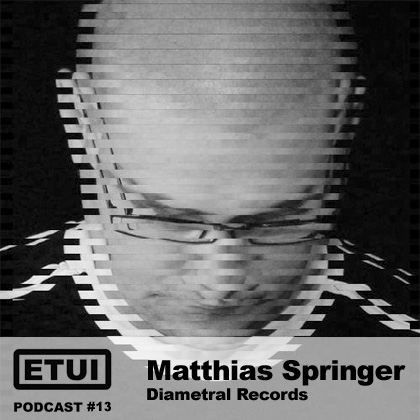 Munich based producer Matthias Springer has delivered his dark acidish techno track „Dark Orbit“ to our Etui Winter Camp 2 compilation. He has been producing music since the early 2000s. His compositions can be found on labels such as Eintakt, TicTacToe or Parquet.

Techno, Dub, Acid, Detroit, experimental and industrial sounds are the main inspirations that appear in most of his music, but also downtempo and lounge tracks are around occasionally that let finally finding yourself in an old and smoky jazzbar.

The first contact definitely was the Tunderdome-Series in the early 90’s, just to bother my parents. But my passion for electronic sound emerged steadily from this time on, just because this kind of music can tell stories without any vocals or words.

How would you describe the techno scene in Munich?

Desolate might be a little to strong, but nearly hits the point in my personal point of view. The really good clubs in Munich have all closed during the last years and what is now around is not my current taste of sound. There are really missing darken and foggy clubs with banging and dry techno sound. If you want to party hard Munich won’t be the right place, but there is a very fine producing scene and a lot of great people around.

How would you discribe your music?

Very different I guess, some people told me they can here a unique touch in my tracks if they listen to, but I don’t. The name “Springer” (in english from “to jump”) developed the first time I try to define my music, I always jump around between different genres and try to combine them. I’m bored really fast if I would do music only in one way, therefor electronic music has just too much possibilities.

Form what do you draw your inspiration?

Thats very different, there are a lot of influences around, the last release “La Mia Vita” for example was just a result of a new love that came into my life, which also brought some nice impressions out of the EBM scene. But in general the music is always a great option for me making a cut from reality for a few hours and taking place in a parallel world.

Dub Techno has been evolved in the early 1990s. What you have always been fascinated by this sound?

I wasn’t into dubtechno at all in the 90’s, to slow, to chill, that just happens during the last years when I started to go slow and chill, building complex structures in my sound, thinking about what to tell with my music independent from the usability in a club. In the end it is an listening-experience, it needs time to listen, discovering new tiny sounds and effects in a track, everytime you listen to it again.

Your music sounds always warm, crunchy and well balanced. What equipment do you use for producing?

Ok shocking-time, I’m a digital only producer, all I need is my PC and a controller for some live-tweaks. I love the digital possibilities with really great synths around and still having a clean workspace in my studio. I’m also not into that discussion between analog and digital producing, everyone should do it the way he likes, the way it brings the highest ammount of creativity. And if I sometimes compare digital and analog produced tracks I recognize only minor differences, that shows how great the software already sounds.

You are running a lot of labels such as Diametral or DimbiDeep Music. What are the ideas behind these labels?

The basic idea was to create something own, built and design things as I like, no one who tells me what to do, without making any compromises. I wanted to support newcomers around, give them a chance to publish their sound, and of course there are a lot of great musicians out there that are not signed yet. The mass of different labels was just the result of my general passion for electronic music, I like the large spectrum in this kind of music and just wanted to have all of it!

For your label you singed international artists such as DJ Anya from United Arab Emirates. Do you feel the Dub House / Dub Techno scene around the world is still growing?

Yes I’m really happy about this, Anya is very talented and I love her style in producing tracks, so it definitely made sense to start a release-party in Abu Dhabi to spread this kind of sound. Also the emerging number of dubtechno related events an festivals in Europe is an evidence that we are on the right way building a great scene especially for our genre.

What are the ideas behind your music and what can we expect next from you?

Generally I have no idea if I start a new track, don’t know where it will end, maybe ambient, downtempo,deep and dubby techno or even trance. Currently I have seen a lot of documentaries about the big bang, the universe, black holes and so on, and always thought about how would I explain it if had to use music only, and thats just the result of Dark Orbit, one of 4 tracks in that way. The 3 other tracks will be released on May on my label DimbiDeep as “Black Nebula EP”. Beside I finsihed my album debut, that will be released on my label Diametral in a few months, that will be very interesting and versatile I guess. A tiny EP will come on Music First in April, and also some remixes will come up next time.

What is the Idea behind your mix?

Thats just pretty simple, I always surrounded by a lot of sound from great artists, especially thru my work for DPR-Promotion. In fact I always try to support the artists I work with, independent in which way we work tegother. I always take my favourite tracks of them and try to built a little story with my selection. That result can be very different, but always with confidence ;)