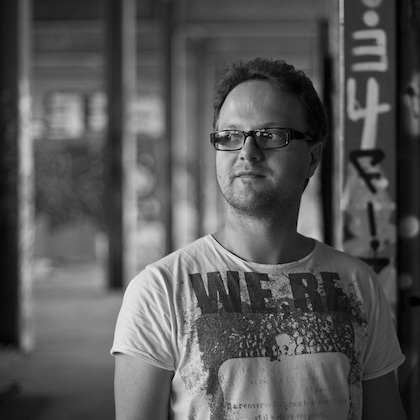 While standing on top of Hong Kong’s “The Peak” and looking down to Central, you will see big
birds flying circles over the city’s skyscrapers. This is a typical inspiration for Insect O.’s hypnotic techno.

Beside his music, Oliver shares a big passion for traveling and video filming. New Zealand,
Thailand, China, Australia or Bolivia are some inspiring places for him, where he played live or dj-sets and shot some video clips for his music. Together with Melbourne’s Echo Inspectors he recorded Bourne Dub which has been released on australian Primary [Colours] imprint in July 2015. In Bolivia he found the name for his first upcoming full length: Atacama. It will be out in spring 2016. Somebody call his music travel techno.

The roots of his music are somewhere between dub and detroit techno, inspired by artists like Basic Channel or Maurizio. His goal is to transform dub and detroit techno in an up-to-date audio frame, ranging from spheric and hypnotic to rough and driven. Most of his music has been released on his own Etui Records imprint. It´s also a growing platform for artists from around the world.

In the studio he combines modern production techniques with old analogue flavour. The studio table is full of black boxes from Elektron, an Eventide SPACE pedal and some other sound boxes. To capture the analogue flavour in the mix down process, he works with plugin emulations by Universal Audio. Always on the look to enhance his art of music production and to dive deeper into the process he attended to FELD workshop with Ulf Langheinrich at ICAS festival 2015.

Insect O. is an old hand in Dresden’s electronic music scene. Enthusiastic about the radio show “electronics” on East German radiostation DT64 in the early nineties he started buying records and making music at the age of 14. In the late 90s he was co-promoter and even resident dj of Dresden’s famous techno club Flugzeugwerft. Nowadays he is member of DAVE festival board
with focus on music production workshops.