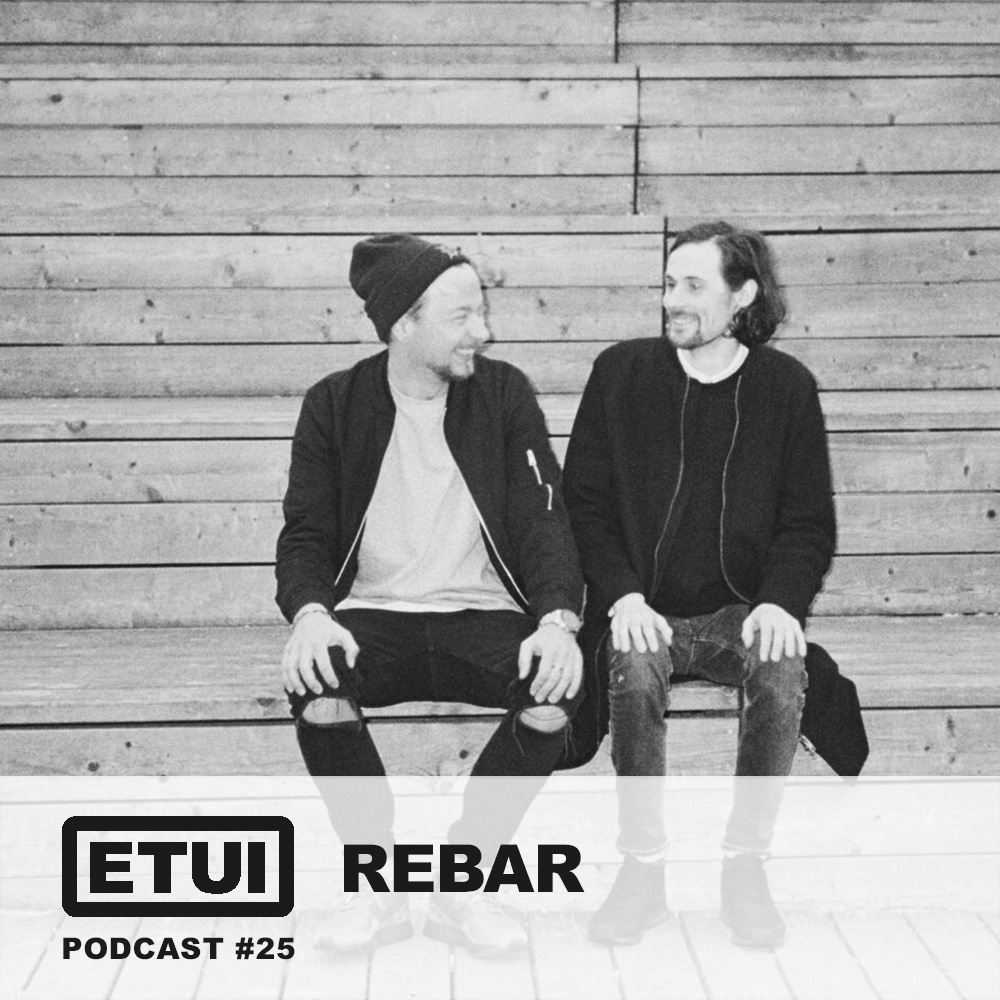 In the physical world, “Rebar” is an object, often used to reinforce concrete. In the world of music, though, Rebar is the joint venture of Andreas Pionty & fumée grise, the label-heads of “made of CONCRETE”. Their techno track “Morining Routine” on our Etui Winter Camp 4 compilation proves the best thing you can do in a cold winter night is to dance your shoes of in the strobe light of a techno club.

How did you come in contact with house and techno and met each other?

Originally, we both come from small villages in the east of Germany but nowadays we live in Berlin (fumée grise) and Dresden (Andreas Pionty). We met each other around 2010 at a gig we were both booked for in Dresden (Germany). We had to play a spontaneous “back 2 back“ set even though we didn’t know eachother. One of the turntables was broken so one of us played with CDJ and the other one with Vinyl. It was working quite well even though Jens (fumée grise) was playing mainly house at that point, while Andreas was spinning techno. After that exprience we stayed in touch and now we also share a moniker.

fumée grise: I’ve been listening to electronic music from my youth years, although surely it was more commercial at that time. Friends took me deeper into the scene and around the time I turned 18 and got my first car, I finally the chance to visit clubs and subsequently fell in love with the harder side of Techno.

Andreas Pionty: For me everything started with my bigger brother, he would always go to the Love Parade and to the early parties in my home area. We would always listen to his tapes and minidiscs. From that point on, I was sure that I also have to be involved in this ;) Shortly after, I was already getting the chance to train using on my own equipment.

That’s a good question. Maybe we could describe it as „Story-driven dance music“ or „everyday-bullshit translated into music”?

We work on music in general with a conceptual idea behind often inspired by samples we recorded in our daily lives, at gigs or at holidays. For us this is the central theme in or work and not a specific genre. If you listen for example to our Rebar #1 (Lost In Tokyo) release you find 3 different tracks on one release but connected via one theme.

We would say everything around us is an inspiration as all the things in your surrounding have an effect on you, wether consciously or unconsciously. We definitely have different passions, but the biggest one we would say is the music and the cities we live in and their architecture. This is rather easy to see if you keep an eye on our label „made of CONCRETE“.

Our studio is everywhere and nowhere. We don’t have a real studio, we would call it a „made of CONCRETE“ studio lab. :)

As we both live in different cities and we’re also good friends with our label act Alek S (who also lives in different town), we try to meet all together in Berlin, Dresden or in Cottbus (Alek S’ hometown) for a studio weekend. We lock the door for 2-3 days and all we do is make music, listen to music, talk bullshit and go out for dinner. To us, this always feels like a class trip and it’s the best option to see each other, have fun and also produce some nice tracks at the end.

The studio setup we use for these sessions is a basic one. In general we work with Ableton, a microKORG synthesizer, NI Maschine and of course a Field-Recorder

Your “Morning Routine” has been on this years Etui Winter Camp compilation. Can you tell as about how you recorded and produced the track?

For this track we had already a clear vision before we even started with the production. In the beginning we searched for some tracks we like to get inspired and to find the general flow of our track. And as we always work with field recordings in our tracks we checked our database to see which sound could fit to this concept. One folder was packed with sounds from the daily morning routine. Like making coffee, clean cat toilette, brush one’s teeth and so on but the sound which perfectly fitted was the water boiler which at the end got quite the key element of the track.

In 2015 you founded the label made of CONCRETE. What’s the idea behind the label?

As we both shared the dream to run a platform to release music of friends and artist we like we decided at one point to turn the name we had already in mind into a label. It was just felt right to do it at the time we did it.

Now after more than 3 years on the marked we’re happy that we’re still doing it in the way we started the label. Their are artist like Lineares (former Steven Cock) or Alek S who did the first releases on our label and still on board. Or new family members such as Kaiser or Danny Kotz who became regulars. We’re also happy that Toni Dextor, who was from the start a resident at our label nights, release soon his first ever EP on our label. With Johannes Volk, Myles Serge, Andres Zacco or Alex Bau (just to name a few) we had also some „legends“ on our label which we never could imagine at the begin. Now let’s see how this story continues.

Where do you recorded the mix? And what is the story behind the mix and the tracks?

We recorded this vinyl only mix some weeks ago at Club Paula in Dresden. We played a warm-up set and as this was a night in that people definitely didn’t rush to enter the club we played our whole set a little bit deeper than we usually do and also test some tracks. At the end also an empty club can be good for something. :)

Sure when we play a warm-up set we normally dig deeper but for the reason mentioned before we had the time to play some more Dub- and Deep-Techno tracks rounded off by some House elements as well. Our selection includes some all time favorites by us from Efdemin, Gilmer Galibard, Traumprinz/Prinz Of Denmark, the Âme classic „Basic Track“ or „It’s All Good“ by or man Alex S.

What is your favourite spot / place in your hometown?

fumée grise: In Berlin I love to walk along the Kielufer/Weigandufer and chill at the Landwehr Canal where Neukölln, Kreuzberg and Alt-Treptow join up

Andreas Pionty: In Dresden I like to sit in one of the many beer garden with a wonderful view to the city and have a drink or just chill.

What is your “only in Berlin” / “only in Dresden” experience?

fumée grise: In Berlin everybody can find its niche and work on its dreams or just live the way a character wants to. In my opinion it’s quite unique in this quality. As Berlin changes a lot over the years (some things for the good and some for the bad) we will see how long this will be possible.

Andreas Pionty: In Dresden you have a unique contrast/clash between the beautiful historic oldtown + its museums/galleries and the modern and contemporary side on the other hand with for example some great clubs and events.