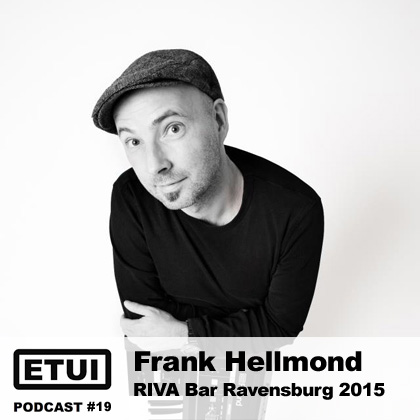 Ravensburg is a small village 17km north of Lake Constance. For Frank Hellmond is this the right place to create his deep and dubby techhouse sound.

Frank Hellmond joined our Etui camp in 2012. His track “Sunday” has been released on our first Etui Winter Camp compilation. Since then he released several tracks on vinyl and our winter camp compilation series. His tracks True Lies, Lost and Sh2000 are still in our label top 10 on beatport.

He started making music with Dieter Krause in 2001. Their first project was called laplaceausoleil. Since 2008 he also forces his solo career under his given name. He has released several records on labels such as Eintakt, Tiefenrausch, Paperjet Rec., Turmfalke, or Sinergy Networks.

I started listening to house music in 1989, but with main focus on acid jazz, soul and funk. From mid 90s I drifted more and more into reduced electronic music like deep house, dub techno or idm and also started djing.

That’s a tough question. Maybe from the many tracks I´ve heard in my life. I guess the most ideas come in my mind after a good night sleep and a proper breakfast.

In 2006 you co-founded the netlaben Dreiton. What is the idea behind the label?

I founded dreiton.net with some friends in 2006. From the beginning on it was a community thing to release great music from new artists. We want to give them a reference. We started as a netlabel. Since cat# 031 our releases are also available at the download stores. We just want to focus on the music and the artist itself.

I´m using hard and software. I agree with many artists that it doesn’t really matter what you are using. The only thing that matters is your creativity.

But I really like to tweak the knobs of my synthesizers and I really love my old machines. You can just hit play and listen to what the machines are doing. It’s just for the moment. I try to record these moments. It’s such a different workflow than just moving boxes in your DAW. Like 25 years ago. Nothing is perfect.

Within the next weeks there will come out 2 remixes on Paperjet Records and Dushe. To release some new own material I still will need some time.

My mix was recorded at Riva Bar in Ravensburg. I play there regulary since several years. The owners support the cool electronic music far away from the mainstream house. So I can play tracks just for listening pleasure that I normally wouldn’t play in a club. So my mix transports the nice atmosphere of my beloved Riva Bar. Nothing was planed.