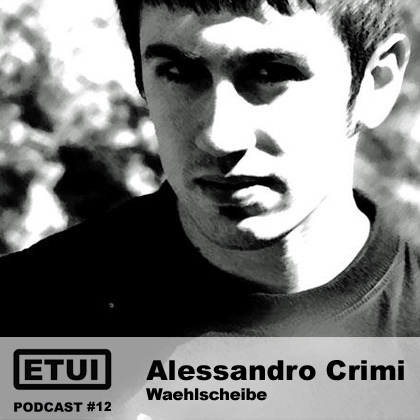 Feldkirch (Austria) born Alessandro Crimi is an electronic music producer, DJ and record collector. He is living in Switzerland now. Music always has been his big passion. It all started very early when he found some real gems in his parents’ record collection from the likes of Kraftwerk, Pink Floyd, Pet Shop Boys or Depeche Mode which he really loved. 20 years later his own music has been released on various labels like Sthlmaudio, Italic, Broque and his own Waehlscheibe imprint. With “Stellar Remnants” and “Quantum Realm” he delivered 2 wonderful dub techno tracks to our Etui Winter Camp 2 compilation.

You are known for your deep and Dub influenced DJ sets, and many people say that you are a true specialist for playing warm ups. What is the special thing about playing warm ups?

To play the first set of a night is always a new challenge. Not only because you have to start with a fairly empty room – the music should also sync with the Dj who will go on next. It’s important to think about who you are opening for to avoid overpowering their sound. The job of an opening Dj is also to peel people away from the bar and keep building upon that small nucleus of early dancers that will eventually become a packed dancefloor, but without going overboard too early. The next Dj should just be able to continue.

To make this possible you need an extremly large record collection and the feeling for the right record in the right moment and of course the optimal tempo. Over the years I have often opted for the warm-up slot. I find it a wonderful challenge which if played properly can result in maximum musical fulfillment.

How would you describe the techno and house scene in Switzerland?

For my personal taste of music it is hard to find a venue with good (in my opinion) acts/music. Especially in the eastern part of Switzerland where I live. Because of this i don’t go out too often. That was different some years ago when for example the “Dachkantine” in Zurich still existed. The music there was always special. It was like a second home for me.

Now in most of the clubs the music is going more and more into a mainstream-direction. But I think this is not only in Switzerland, it’s in general. Luckily there are still some places where you can listen to very special artists for those who know. For example at the clubs “Zukunft” and “Frieda’s Büxe”, both located in Zurich, just to name a few.

When it comes to the inspiration for your own music, you name a lot of different artists such as Matthew Herbert, Pépé Bradock or Basic Channel. How would you describe your own sound?

I listen to many different music styles and I guess this can be heard in my own music because I get inspired automatically by the music I listen to. I also produce different styles of music depending on my personal mood. Sometimes it’s more dubby and sometimes more housey. But for sure there’s always a huge portion of deepness in it.

Switzerland is famous for its nature and the mountains. Do you draw some inspiration from the surroundings?

Definitly. The nature is a big inspiration for my music. I like to walk trough a forest or walk along a sea.

In 2012 you started the label Waehlscheibe together with your friends. What is the idea behind the label?

To run an own label was always something we wanted to do. So it was only a matter of time to realize this project. The idea is to build our own platform, to support artist friends, to release the music we all like, also from more unknown artists and of course to release our own stuff. Because we wanted to have something special and because our favorite format is vinyl we decided to release only vinyl. We think that also for an artist it is the most valuable thing to release his own music on vinyl.

New tracks and remixes on several labels. Can’t give anymore informations yet as this is still secret. Just check regularly my sites on facebook or soundcloud to be up to date. Also there you will find links to my current podcasts/mixes and of course the dates for my next gigs.

What is the Idea behind your mix?

Mostly when I mix a podcast for a website I try to play music which can be heard at home or while driving with the car or whatever. Most people listen the music directly in front of the computer – so I want to give them (hopefully) the right mood. For this mix I played gems that also can be related to the musical style of the Label (Etui).